With fast cars in the first three practice sessions, the Andretti Autosport quartet were looking promising for Qualifying and the Firestone Fast Six. The first round of the qualifying session saw Ryan Hunter-Reay and Zach Veach set quick enough times to advance through to Round 2. The second session hosted Alexander Rossi and Marco Andretti. Andretti just missed the cutoff to advance to Round 2 by 0.1037 seconds settling for a 16-place start, while Rossi moved on.

Round 2 consisted of 10 Hondas of the 12 competing and a few different tire strategies. Veach and Rossi, who both made the Firestone Fast Six in 2018 at the Grand Prix of Portland were forced to settle for positions 11th and seventh, respectively. Hunter-Reay was the lone Andretti driver to advance to the final round.

With an alternate strategy, Hunter-Reay finished sixth in the Firestone fast six.

The Grand Prix of Portland brought a podium finish and small climb in points for Alexander Rossi, while his teammates were not as fortunate, each suffering from on track incidents during the 105-lap event.

Coming away from the Pacific Northwest with a third-place finish, Rossi reclaimed second in the points standings and heads to the season finale trailing championship leader Josef Newgarden by 41 points.

Marco Andretti rolled off from 16th and quickly gained positions to run solidly inside the top 10. Following contact with Car 22 on Lap 73, Andretti was forced to pit from sixth place for a new front wing and fell back to 14th. The No. 98 team ultimately came home in the 13th position.

DHL's fastest delivery driver Ryan Hunter-Reay held position inside the top-five before making an on track move that resulted in a collision with Car 60 just 14 laps into the race, bringing out the race's second caution period. The 28 car was taken behind the pit wall for repairs and rejoined the race on Lap 28. The yellow and red team ultimately retired to the pits with just a handful of laps remaining, recording an 18th-place finish.

Zach Veach was primed for a solid race day after starting from 11th, but was collected in an opening lap incident in Turn 2 causing damage to the rear of the 26 machine. Because of track position and procedures, the car was not able to be returned to the garages for repair and the day ended after just barely beginning for Veach and his crew. 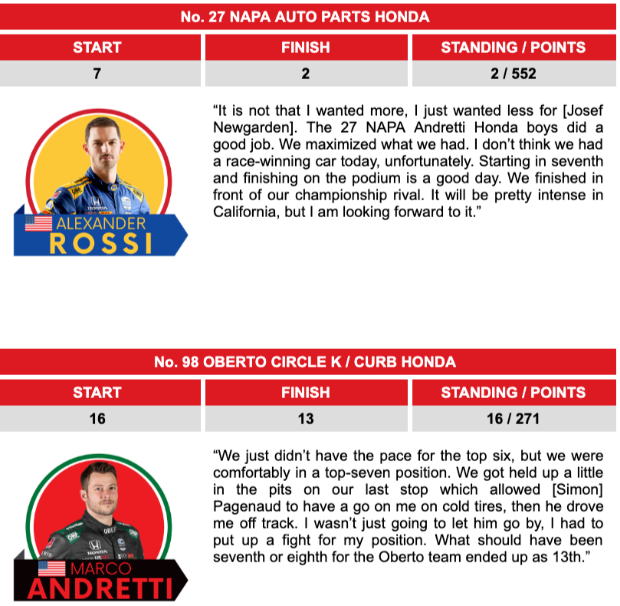 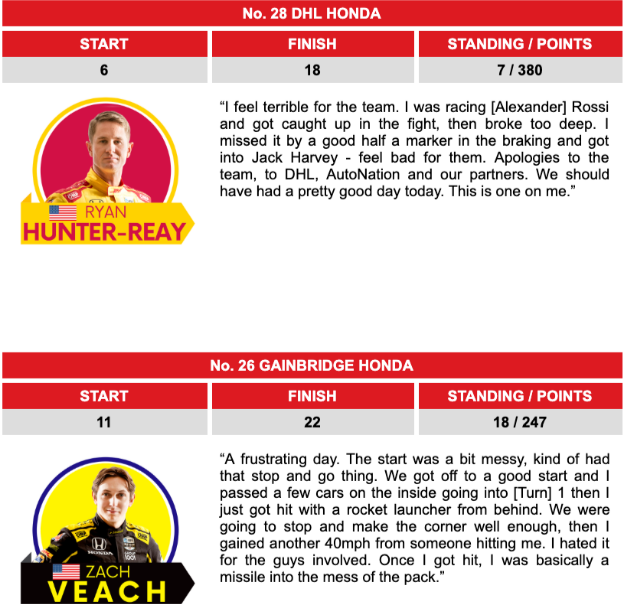