With the return to road course racing came the return of knock out qualifying and a battle for the Firestone Fast Six. For the first round of qualifying Ryan Hunter-Reay and Marco Andretti took to Group 1 while Alexander Rossi and Zach Veach represented the team in Group 2. Andretti and Veach struggled with car setup, ending their qualifying efforts after Round 1. Both Hunter-Reay and Rossi advanced to the second segment and laid down their battle laps in an attempt to reach the Fast Six.

In the end, it was Rossi advancing on to the final round, and securing a starting position on the front row while Hunter-Reay, Andretti and Veach took the grid in 10th, 19th and 20th, respectively.

Another year of racing in Ohio's heartland is in the books with Round 14 of NTT IndyCar Series competition complete, and for the second year in a row the 90-lap event was run without caution periods.
After a well-executed, three-stop pit strategy, Ryan Hunter-Reay went home with hardware for a third-place finish, his second podium of the 2019 season and 46th career top three. Hunter-Reay completed an all Honda podium run in Honda Manufacturing's Ohio backyard.

Alexander Rossi rolled off strong from the front row and committed to a two-stop strategy, one of only three drivers in the field to do so. After the final round of stops settled, Rossi ran sixth, two spots behind points leader Josef Newgarden, before Lady Luck appeared. With Newgarden falling out of the race on the closing lap, the No. 27 came home fifth and Alexander Rossi tightened the points gap to just 16 points heading into the mid-summer break.

Marco Andretti started the race with a strong charge behind the wheel of the UniFirst / Curb machine, making his way from 19th to 11th before the first round of pit stops. Andretti eventually settled into 15th-place where he finished the day.

Ohio native Zach Veach rolled off from 20th and struggled with balance in the No. 26 machine. The sophomore driver fought his way to 17th before falling back to 21st for the twin checkers. Veach looks ahead to Pocono Raceway where he finished in the sixth position for the 2018 running, his first 500-mile race at the Tricky Triangle. 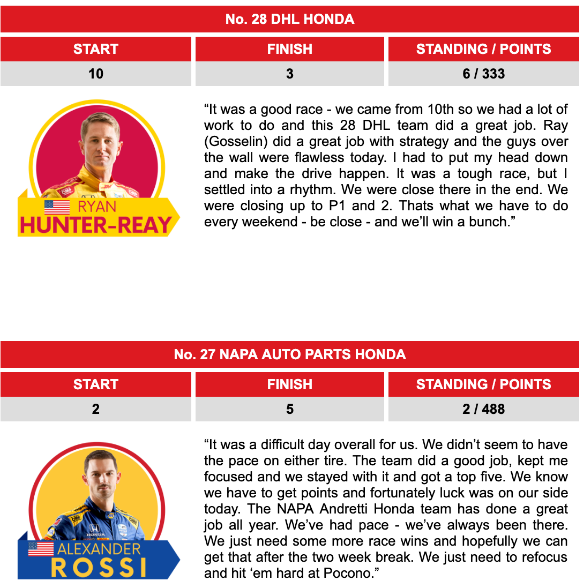 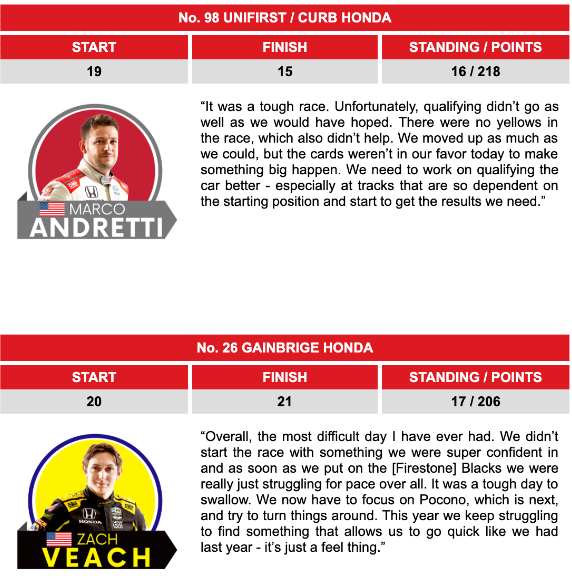