Saturday's afternoon qualifying session set the starting grid and it was Alexander Rossi that led the way for the #AllAndretti team after advancing to the top 12 and just narrowly missing the Firestone Fast Six. Rossi's starting position of eighth tied his best start at the Alabama road course. DHL driver Ryan Hunter-Reay joined Rossi in the second qualifying round, but settled into an 11th-place grid spot with the checkered flag.

Marco Andretti and Zach Veach joined Rossi in Group 1 of qualifying, but neither advanced on to the top 12. The No. 98 car of Andretti missed the top-12 cutoff by just four-hundredths of a second.

With a bullseye set on the podium, the Andretti team took Sunday's green flag with one goal: pass cars. Although at the end of the day podium positions alluded the squad of four, the team did see plenty of passing action.

NAPA Racing driver Alexander Rossi brought home the top spot for the team with a fifth-place finish, his 19th career top five. Rossi led a total of three laps and never fell lower than eighth on his way to the checkered flag. The California-native sits fourth in the driver standings heading to Long Beach where he will work to defend his 2018 victory.

Two-time Barber race winner Ryan Hunter-Reay rolled off from the 11th position and ran as high as fifth during the 90-lap race. Hunter-Reay came home in the eighth position, his 119th career top-10 finish.

The team's biggest climber of the day was series sophomore Zach Veach, who gained 11 positions on his way to a 12th-place result - his best career result at Birmingham's 2.3-mile road course. Feeling back in the groove, Veach looks to to the west with high spirits of topping his 2018 Long Beach result of fourth.

Leaving Alabama inside the top 10 in the driver standings, Marco Andretti took a 14th-place finish from Barber after battling handling issues throughout the Sunday's race. With 220 career starts under his belt, the veteran driver is fighting hard for his first win of 2019 and looking to better his 2018 Long Beach finish of sixth. 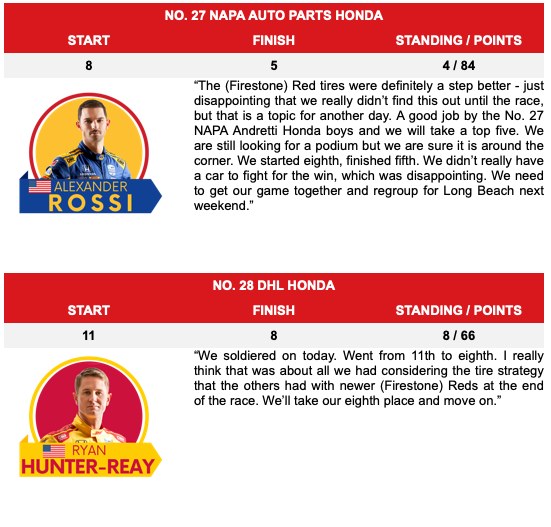 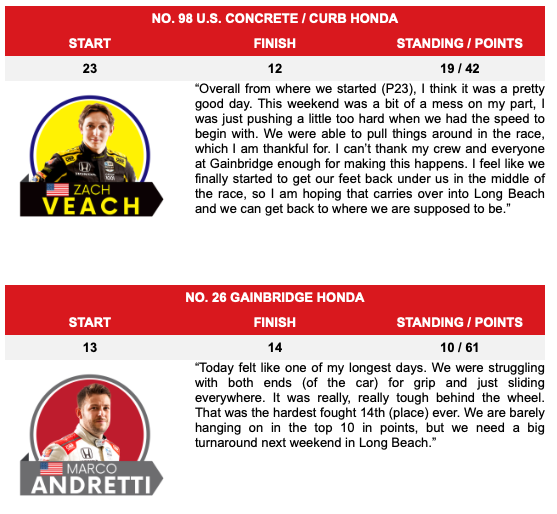