As Round 1 began, Marco Andretti was the lone Andretti Autosport driver in the first group of qualifiers. Finishing sixth in his group, the UniFirst driver advanced into the second round. Group 2 hosted Ryan Hunter-Reay, Alexander Rossi and Zach Veach. Rossi and Hunter-Reay finished third and fourth, respectively, placing three Andretti drivers in Round 2. Veach did not advance and took an 18th-place grid position.

Hunter-Reay entered Round 2 with scuffed reds, followed by sticker reds, but experienced a loose moment enter Turn 5 resulting in a loss of pace for the 2012 Toronto race winner. He did not advance and took an 11th-place starting position as a result. Andretti also missed advancing to the Firestone Fast Six, just 0.1358 seconds shy of moving on. Andretti's seventh-place starting position for Sunday's event recorded a career-best in Toronto for the third-generation driver. Rossi finished sixth in Round 2, making a fifth Firestone Fast Six appearance this season.

The 85-lap race, bookended by full course cautions, saw many different strategies playing out through the field. But it was the strategy of those that led the field to the green flag that prevailed, earning their podium-finishes.

With Alexander Rossi starting from the fourth, he knew he had to have a flawless race in order to collect a podium finish. On the first turn of Lap 1, Rossi overtook the third-place starter, Ed Jones. Rossi maintained the third spot to finish the day only four points away from the championship lead.

At the tail end of the first lap, a six-car incident brought out the first caution of the day. The three remaining Andretti drivers all found themselves affected by the incident. Marco Andretti saved the car during a brilliant 360 move and managed to drive away unscathed, avoiding the collection of cars that happened just after being spun. The UniFirst car went on to collect a 105th-career top 10 for Andretti while gaining one position in the championship standings.

Zach Veach wiggled his Gainbridge machine through the incident and took a fuel strategy option that placed the sophomore driver in the race lead for four laps before entering the pits for routine service. The 26 team came home 13th and gained one spot in the championship standings.

It was Ryan Hunter-Reay who suffered the most unfortunate result of the Lap 1 collection, as the 28 car was forced into the runoff to avoid heavy contact. After lost ground on track, the DHL team went off-strategy taking on the primary tires early in the race, climbing Hunter-Reay inside the top five. In another turn of unfortunate events, the 2012 Toronto race winner had to make an unschedule return to the pits to fix a safety belt issue, falling to the back end of the field. With no opportunity to regain ground, Hunter-Reay went on to record a 16th-place finish.

On his final flying lap of qualifying, Rossi brushed the wall during the Firestone Fast Six. With a much smaller effect than anticipated the NAPA Racing driver earned a fourth-place starting position. 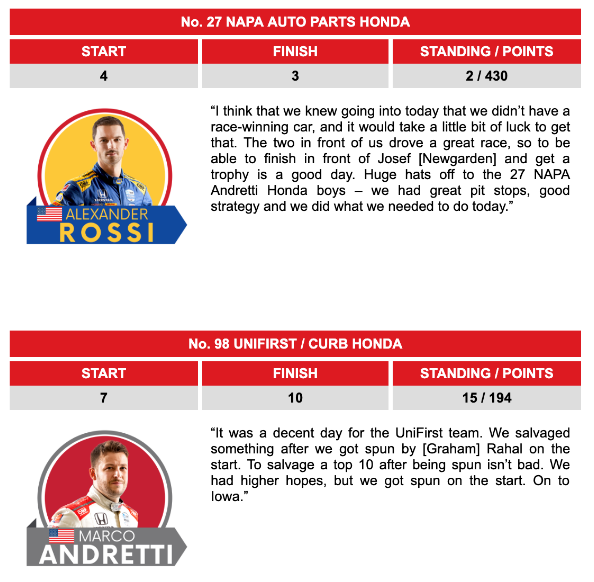 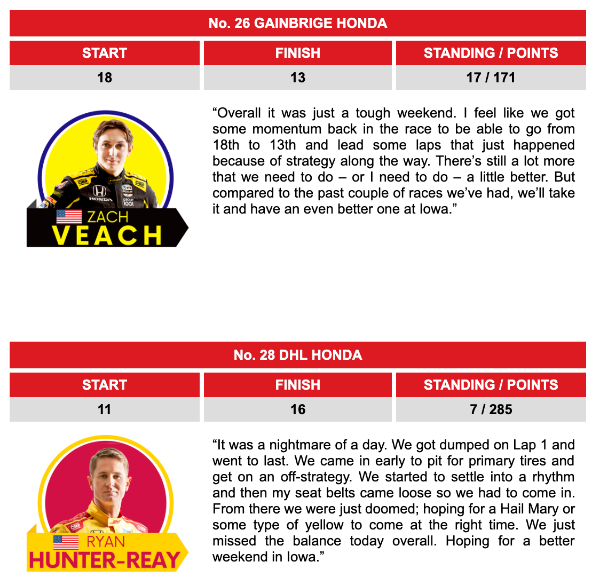