RACE RECAP: INDYCAR Classic at Circuit of the Americas

The field was set for the inaugural INDYCAR Classic Saturday and the Andretti team had a car on each of the front two rows. Round 1, Group 2 of qualifying saw a the session come to an end with a red flag allowing Zach Veach and Alexander Rossi to join Ryan Hunter-Reay (Group 1) in the second round, unfortunately the red flag interrupted Marco Andretti chance to advance the 98 car. After the time expired on Round 2 of qualifying, Rossi and Hunter-Reay found themselves in the Firestone Fast Six.

Hunter-Reay earned his 30th top-three start when he secured the third grid position for the INDYCAR Classic, while Rossi clocked his fast lap in the Firestone Fast Six on a one-lap run to secure a front row starting position.

Clear skies hung over Circuit of the Americas for the inaugural INDYCAR Classic while a field of 24 set out to make history deep in the heat of Texas.

The opening lap saw trouble for Zach Veach as the 26 car made a trip off course damaging a toe link in the process. Veach returned to the track one lap down. The luck never turned around for Veach as he made another unscheduled trip to pit lane late in the race for a new front wing following contact with the No. 9 car.

Meanwhile, the 27 team showed early that the NAPA machine had pace for the podium while Ryan Hunter-Reay set his place firmly in the top five.

The race continued drama-free until the 60-lap race’s single caution was brought out on Lap 44. Benefitting two drivers and challenging one, the caution allowed Hunter-Reay and Marco Andretti - who both pitted just prior to the yellow - to gain track position while it pushed Alexander Rossi, who had been running in second position before the yellow flag, back to 14th.

With just 11 laps of racing after the last green flag, Andretti rose to sixth while Rossi climbed his way back to ninth. Hunter-Reay charged on for a third-place finish, collecting his 45th career podium and valuable championship points allowing him to jump from 21st to eighth in the standings. 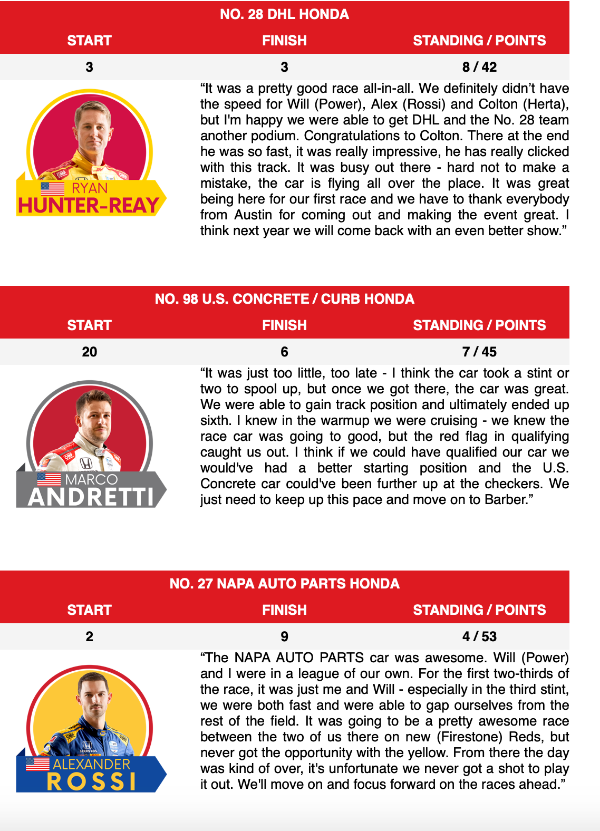