With temperatures soaring into the high 90s and heat indexes well over 100 degrees, conditions were tough for qualifying around the 7/8-mile bullring that is Iowa Speedway. The day's session followed standard qualifying procedures, starting in reverse order of championship points and taking the fastest two-lap average. Zach Veach was first out for Andretti Autosport to qualify his No. 26 Gainbridge Honda and posted an average of 171.626 mph, ultimately placing him on the outside of Row 10.

Up next to make his qualifying run was Marco Andretti. Andretti wheeled his No. 98 U.S. Concrete machine around the 7/8-mile track showing a 173.044 mph average to grid 18th for Saturday's race.

Rolling out 16th from the qualifying line, DHL driver Ryan Hunter-Reay qualified with a two-lap average of 175.618 mph, placing him on the inside of Row 5.

Rounding out the Andretti quartet, Alexander Rossi was second-last to qualify from the field of 22 drivers. Rossi qualified his No. 27 NAPA AUTO PARTS machine with an average of 176.057 mph, earning the sixth and the highest starting position for Andretti Autosport.

Iowa Speedway brought the heat Friday but Saturday was all about the rain. Evening showers spoiled the original start of the Iowa 300, delaying the start time by more than four hours. As the weather cleared and with a dry track to race on, the green flag was in sight for all teams and drivers to buckle in for a "late" night race.

The field finally reached the grid in time for a 11:45 p.m. ET command to start engines. Leading the Andretti Autosport quartet, Alexander Rossi looked to make moves forward from sixth as the green flag flew.

Lap 16 brought out the first yellow flag of the night, leaving the field to begin mixing up strategies by coming in for early pit stops on Lap 19, Ryan Hunter-Reay and Marco Andretti.

Although it looked as the skies had cleared, a few sprinkles appeared on pit lane, causing the field to come to a stop on pit lane on Lap 55 as the red flag was waved. As the sprinkles stopped and the 27-minute red flag period was lifted, the field was able to roll off pit lane to cycle through with pit stops and ultimately see the green flag wave again on Lap 65.

After struggling with handling issues and multiple attempts to correct and diagnose the problem during pit stops, Andretti had to regretfully retire the No. 98 U.S. Concrete Honda from the race after 205 laps complete.

Four more cautions poisoned the race, continuing to allow for strategies to change even more. As the last caution of the night fell on Lap 264. Rossi and Zach Veach made the call the to come to pit lane for fresh tires and fuel in hopes of breaking into the top five when the restart came on Lap 274. The drivers would finish sixth and seventh, respectively. Veach advanced 13 positions over the course of the 300-lap race.

Hunter-Reay had his eyes set on a fourth win at Iowa Speedway Saturday night, the DHL driver battled balance issues to gather as many points and positions as he could before ultimately bringing home a 17th-place finish. 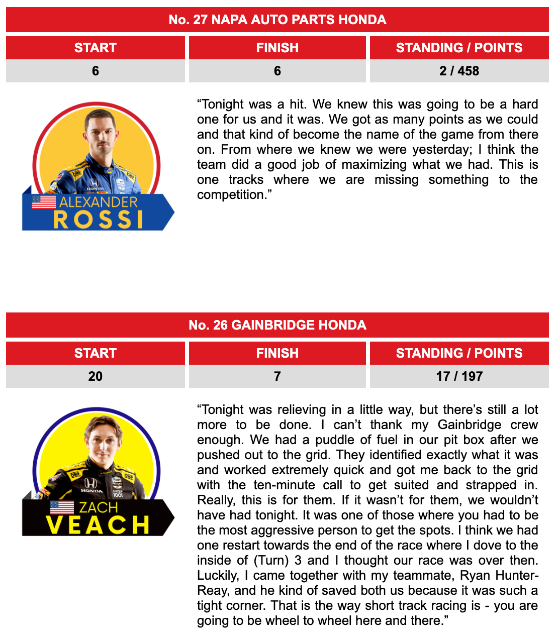 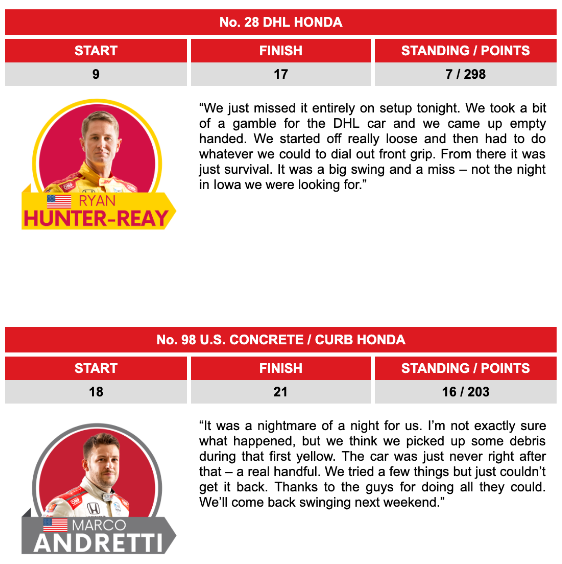