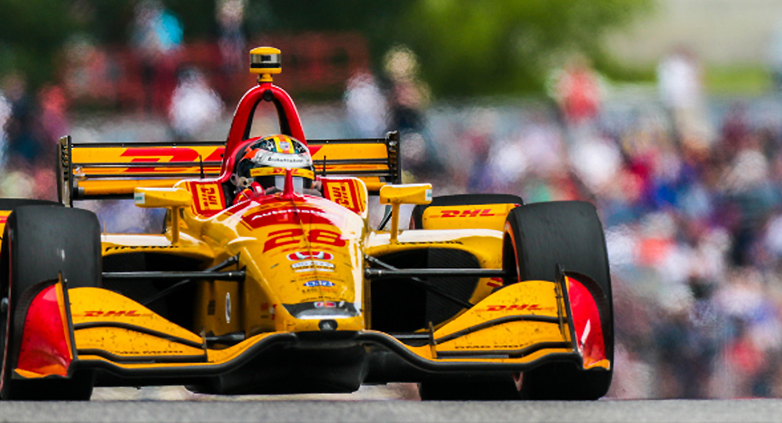 With Ryan Hunter-Reay the lone Andretti Autosport driver in Group One of qualifying, the DHL driver found himself caught in traffic during his quick lap around the four-mile course settling for a starting position outside of the top 12, despite setting the fastest lap times of both Practice 1 and the warm up and fourth during Practice 3.
Marco Andretti, Alexander Rossi and Zach Veach all headed out for Group Two of qualifying for the REV Group Grand Prix presented by AMR. Rossi claimed the fastest lap of the group with Andretti rounding out the top six to advance to the second round. Veach narrowly missed advancing by just 0.0036 seconds.
After Round 2 was complete, Andretti had secured at 10th-place starting position with Alexander Rossi advancing to his fourth Firestone Fast Six of the season.
At the conclusion of Qualifying, Rossi had earned his 11th career front-row starting position.
CHASING THE CHECKERS
Despite starting from the 10th position, Marco Andretti's race ended early. On Lap 16, shortly after the first round of pit stops, the third-generation driver sensed an issue occurring with the car. The engine was mis-firing and the timing stand coached Andretti through a few scenarios to diagnose the issue. On Lap 18 the 98 machine was called into the pits where the team and Honda continued to work to diagnose the issue. After several minutes and a handful of laps spent in pit lane, Andretti climbed out of the car, faced with a shortened day and a 23rd-place finish.

After running as high as 12th, Zach Veach and the No. 26 team decided to take a gamble on pit strategy for the first stop, staying out for one lap longer than their competitors. However the tires began to fall off and the car lost grip, losing speed and track position. From that point, Veach pushed to try to gain position, setting his fastest lap of the race on Lap 46 and ultimately finishing 18th, jumping one position in the championship standings.

Ryan Hunter-Reay gained ground at the start of the race before getting caught up in an opening-lap incident with Scott Dixon and running off track. Falling back to 18th, the DHL driver battled his way back inside the top 10 where he remained consistently before settling for an 11th-place finish after taking on Firestone Red alternate tires for the final stint.

NAPA Racing driver Alexander Rossi attacked Colton Herta for the lead on the first corner of Lap 1 and by Turn 3 had taken the first position and began to pull away from the field. After three flawless pit stops and leading 54 of the 55 laps, Rossi drove his NAPA AUTO PARTS machine to victory lane with a 28.4391 second lead over the second-place finisher, marking his second win of the season. 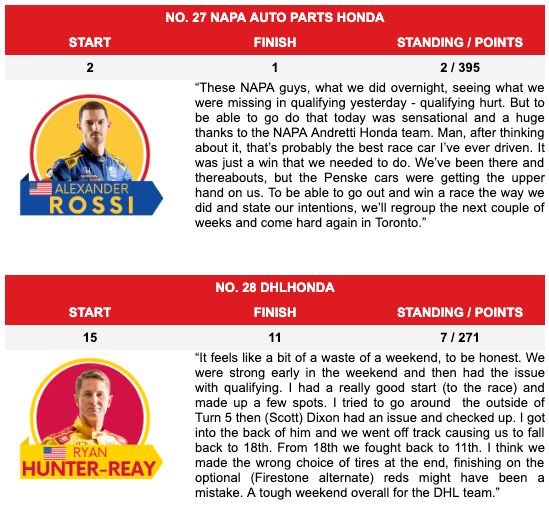 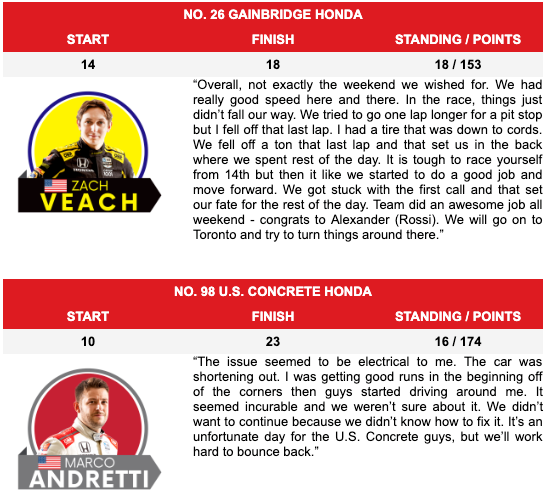