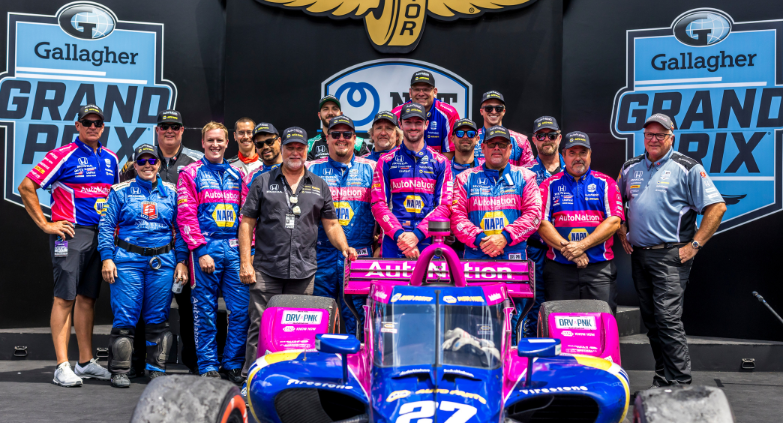 
Rossi has collected two podium finishes this season, but a win had alluded him since running at Road America in 2019. Rossi’s first win with the team and at IMS was in the 2016 Indianapolis 500 on the famed oval. The Gallagher Grand Prix win brings his tenure with Andretti Autosport full circle as we enter the closing races of the season.

"Relief is the main word that came to mind Saturday. We've had some race wins we've thrown away and some where we just didn't have the pace for whatever reason,” Rossi said. “We knew things were trending in a good direction this year. The one constant has been the mental strength of the whole team. It's not just me. They go in every day and work their butts off and when they don't get results, it's hard for them as well. As a unit that's one of our strengths is to just continue forward. It's a big team win. A big thank you to Andretti Autosport."


Like other race weekends, where one driver had highlight moments, other drivers had less memorable moments. Herta was leading the race when a mechanical issue caused him to retire on Lap 55. Herta led 17 laps, fighting off Rossi for the win before his race came to an early end. Herta started the race ninth overall.


"The No. 26 Gainbridge Honda was strong all weekend,” Herta said. “The crew did a great job with the setup; I think we were the car to beat, honestly. We had the issue halfway through the race, and there was nothing we could do at that point. I'm looking forward to Nashville. As a team, we've been strong on street courses, so I think we'll be in a good position."


Devlin DeFrancesco is gaining ground in his qualifying craft. DeFrancesco nearly made his second transfer of the season, but an early red flag in qualifying reduced his time allotted to set a fast lap. DeFrancesco qualified 14th for the start of the race. DeFrancesco impressed at the beginning of the race, gaining more positions than any other competitor by advancing six spots. He would, however, go on to finish the race 18th.


"That was a tough race, but I think we learned some things we can take forward into the last few races of the season. I always say it, I have a great crew. The Andretti Steinbrenner No. 29 PowerTap Honda was strong. We showed that in qualifying; it just didn't come together in the race."


Romain Grosjean also felt the sting of a weekend that wouldn’t come together. Grosjean qualified 22nd in the field, a rare sight for fans of the No. 28 DHL Honda. His race craft would prove much needed as he advanced six positions to finish 16th overall. His fight never withered over the course of the two-day weekend.


"First of all, congratulations to Alexander (Rossi) and the No. 27 team. On our side, it’s been a tricky weekend. We had some issues on Friday that we managed to resolve, but our pace wasn’t good enough for a result. We will analyze everything to make sure we can bounce back in Nashville.”


Andretti Autosport and the NTT INDYCAR SERIES next take on the streets of Nashville for the Big Machine Music City Grand Prix on Aug. 7. This is the second race the NTT INDYCAR SERIES has hosted in Nashville and Andretti Autosport will be looking to continue its success on street courses. The race is broadcast live on NBC with additional coverage on NBC’s Peacock, INDYCAR Radio and SIRIUS XM Radio.