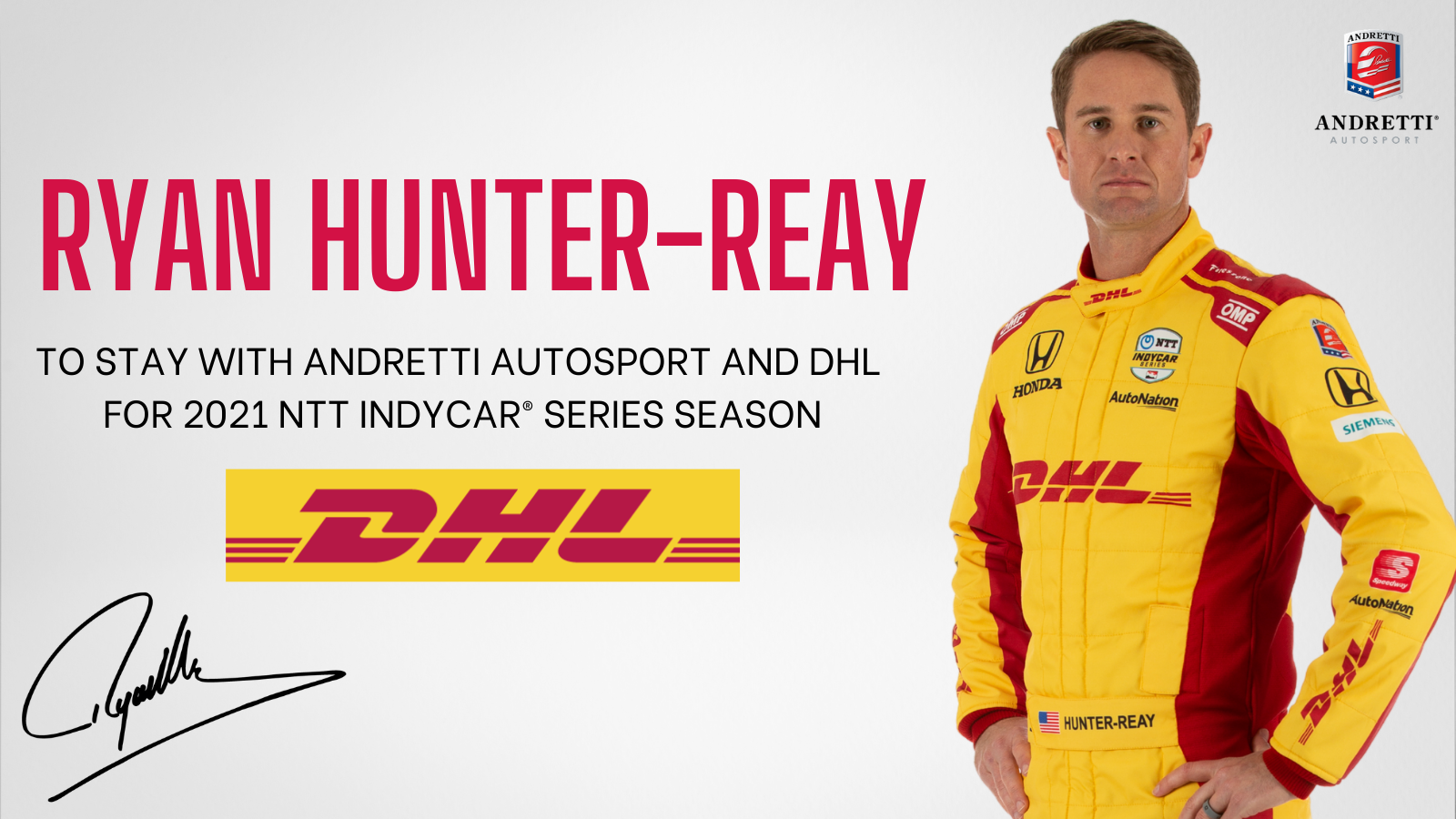 After celebrating over 10 years with Andretti Autosport in 2020, Ryan Hunter-Reay will continue to call the team home. The 2012 series champion will continue to pilot the No. 28 DHL Honda into the 2021 NTT INDYCAR SERIES season. This takes Hunter-Reay’s relationship with Andretti into a 12th season, and marks 11 years of continued DHL partnership.

“We’re really happy to welcome both DHL and Ryan back for the 2021 INDYCAR season,” said Andretti Autosport chairman and CEO Michael Andretti. “Over the past 10 years, DHL has become family to us, and Ryan has recorded some of the team’s greatest accomplishments. I’m looking forward to seeing what 2021 brings.”

Hunter-Reay’s Honda-powered machine will again be painted in DHL’s iconic yellow and red livery for the full 2021 NTT INDYCAR SERIES schedule. DHL, headquartered in southern Florida, first appeared as a partner with the Andretti Autosport team in 2011 as a co-primary sponsor on the 28 car, growing to be the full primary starting in 2014.

“We’re thrilled to continue our partnership with Andretti Autosport into 2021, powered by our No. 28 champion, Ryan Hunter-Reay,” said Mike Parra, CEO of DHL Express Americas. “We’ve shared an incredible history with Ryan throughout his entire INDYCAR career, as he has been an amazing DHL brand ambassador. Ryan has helped to further elevate our brand and engage our employees while he continues to excite racing fans.”

Again joining DHL on the entry, will be long-time Hunter-Reay supporter AutoNation in their associate partnership role. Hunter-Reay, co-founder of Racing for Cancer, has served as an ambassador for AutoNation and their DRV PNK campaign, working to Drive Out Cancer since 2013.

During his tenure at Andretti Autosport, Hunter-Reay has collected 15 race wins with the team, for a total of 18 overall INDYCAR career victories. His most notable accolades including his 2012 championship title and 2014 Indianapolis 500 victory. The 2021 season will mark Hunter-Reay’s 15th season in the NTT INDYCAR SERIES, and his 12th as part of the Andretti Autosport stable.

“I’m eager to get to work and honored to represent both DHL and Andretti Autosport yet again,” said Hunter-Reay. “DHL has been one of the longest tenured primary sponsors in INDYCAR history and that yellow 28 car has become one of the iconic INDYCAR liveries; for that I am extremely grateful. I want nothing more than to add a second Indy 500 win to our accomplishments and earn the title of INDYCAR Champion for a second time as well. Coupled with the DHL partnership, AutoNation has also been vital to my career over the past nine years and I’m very proud for the opportunity to continue as a Drive Pink brand ambassador as well. 2020 was a pretty unconventional season, and we left the year with unfinished business. Overall, as a team, we’re focused on extracting the maximum potential from the speed we had in 2020.”

Hunter-Reay becomes the third driver announced to the Andretti Autosport 2021 INDYCAR stable, alongside Colton Herta (No. 26 Gainbridge Honda) and Alexander Rossi (No. 27 NAPA AUTO PARTS / AutoNation Honda). With few months remaining in the offseason, Hunter-Reay and his Andretti teammates have sights set on winter development. The 2021 INDYCAR season kicks off April 11 at Barber Motorsports Park in Alabama.