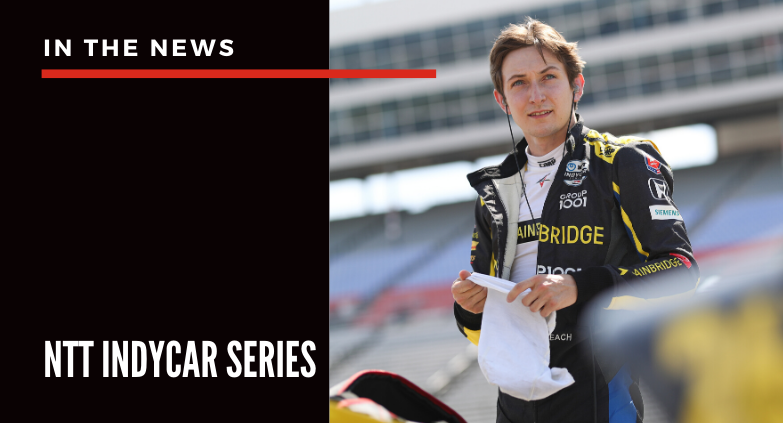 When young Zach Veach hit the track at Texas Motor Speedway for Saturday's practice, it had been so long since the Andretti Autosport driver had been in his No. 26 Gainbridge Honda on an oval that he was shocked.

“It felt like you were looking at a different car,” Veach said. “On these speedways, you are going so fast, you have to look pretty far in front of the car to keep your mind in the right set.

“We’ve been sitting for three months, and now we are going 215 with 4 Gs. It was a shock to my body for the first few laps. I came in, took a breath and went out and didn’t have another problem after that.”

Once Veach regained his composure, he had one of the best days and nights of his NTT INDYCAR SERIES career. He was fast in practice, fifth quickest in qualifications and finished fourth in Saturday night’s Genesys 300 at TMS. He led two laps in a high-speed contest that had just three drivers lead the race, including race-winner Scott Dixon’s 157 laps led and third-place Josef Newgarden’s 41.

It was, without a doubt, the best race of Veach’s NTT INDYCAR SERIES career.

“Tonight, we executed, which was great,” Veach said. “This Gainbridge car felt great all night. I had the pace to stay in the top five and top six all night. Honestly, that’s a lot easier than trying to come from 16th. I’m going to try my hardest to make this a habit.

“It gets back to what we know we can do. We’ve always had the faith in ourselves and the belief. Last year, we were trying too hard, and a number of things didn’t go our way. This year, we went into it with the mindset of having fun and enjoying the process of going out there and making a quick race car.

“Once I stopped trying inside of the car, we started picking up speed. I’m just so thankful we were finally able to put it together.”

Veach begins his third full season at Andretti Autosport. The COVID-19 pandemic forced a delay of the start of the season for nearly three months.

The break provided Veach with time to clear his mind and refocus his energies as a driver.

“Last year, we were struggling to put things together in a positive way,” Veach said. “Ever since we made a change to make Mark Bryant as my engineer, we have a very similar outlook on how the weekend progresses. It’s been fun. I don’t even feel like we really tried hard this weekend. We showed up. The car was pretty good. We made it a bit better for practice and qualifying. In the race, we didn’t make any mistakes.

“I’m really happy about that.”

By simplifying his approach and focusing his attitude, combined with Bryant devising the right strategy for the car, Veach had one of the best rides at Texas Motor Speedway.

He also discovered it’s easier to run with the fast drivers by being one of fast guys and starting near the front. Because of the unusual one-day practice, qualify and race format, teams didn’t have time to over-think and over-engineer.

“The thing I loved so much about being a one-day show is instead of processing every decision and thinking it through multiple times, it was back to that gut feeling,” Veach said. “You would look at a change and you either felt good about it or bad about it, and you didn’t question that. Then you went on to the next part.

“If we had qualified fifth today and were racing tomorrow, right now we would be over-thinking how to make the car better. A lot of times, that makes the car worse.

“Put something together that works, then run it. That is what the one-day show forced everybody to do.”