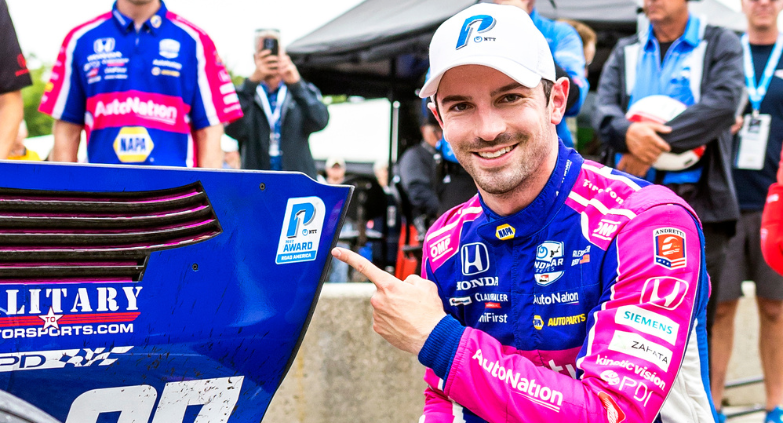 Rossi’s final lap secured his seventh career pole and first since June 2019 at Detroit, as he produced a time of 1 minute, 44.8656 seconds in the No. 27 NAPA AUTO PARTS/AutoNation Honda. That lap also ensured there was a different pole winner for the first eight races of the NTT INDYCAR SERIES season, a feat last achieved in 1961.

Four of the drivers in the Firestone Fast Six qualifying session decided to use the Firestone primary “black” tires, which are more durable but have less grip than the alternate “red” tires. Josef Newgarden used the same strategy last year to win the pole on this 14-turn, 4.048-mile circuit.

“I think we saw with Josef last year that he was able to get Colton (Herta) on the blacks, and most of our competition was on the primaries, as well,” Rossi said. “I think that’s just kind of the trend here.

“It was an amazing job all weekend by the NAPA AUTO PARTS-AutoNation-Andretti Honda guys. It’s been a long time since we’ve been in this position. It’s cool, we’ll enjoy it, but we’ve got a job to do tomorrow.”

Two-time series champion Newgarden will join Rossi on the front row after his best qualifying lap of 1:44.9371 in the No. 2 PPG Team Penske Chevrolet. Newgarden, in a change of strategy from last year, joined Pato O’Ward as the only drivers using alternate tires for their flying laps in the Firestone Fast Six.

“I thought he was on used reds like everyone else,” Newgarden said of Rossi. “I’m surprised he was able to make that work on the blacks, to be quite honest. In my opinion, I thought it was clear we were going to go used reds. They just seemed significantly better this year than last year.

“If he made that work, that’s pretty stout. The lap time he did on blacks was really, really good. That’s an impressive pole.”

Defending series champion Alex Palou qualified third at 1:45.3822 in the No. 10 The American Legion Honda. Teammate and 2022 Indianapolis 500 presented by Gainbridge winner Marcus Ericsson will join Palou in the second row after his best lap of 1:45.4240 in the No. 8 Huski Chocolate Chip Ganassi Racing Honda.

Colton Herta qualified fifth after his top lap of 1:45.5388 in the No. 26 Gainbridge Honda but will start 11th after incurring a six-grid spot penalty from INDYCAR officials for an engine change (unrepairable) after the Indianapolis 500 presented by Gainbridge. O’Ward rounded out the Firestone Fast Six at 1:45.6826 and will start fifth in the No. 5 Arrow McLaren SP Chevrolet. Romain Grosjean, who just missed the Firestone Fast Six, moves up to the third row of the starting grid in sixth due to Herta's penalty.

Rossi and the No. 27 Andretti Autosport team have turned around their season after a rough start. Rossi was 18th in the championship standings after finishing 11th in the GMR Grand Prix on May 14 at the Indianapolis Motor Speedway road course.

Since then, Rossi has finished fifth in the Indianapolis 500 on May 29 and second in the Chevrolet Detroit Grand Prix presented by Lear last Sunday to vault to seventh in the standings, 74 points behind leader Will Power.

It also was announced last week Rossi will leave Andretti Autosport after seven seasons to join Arrow McLaren SP starting next year. But Rossi vowed to continue with maximum effort in 2022 for the Andretti team, and he backed that up again Friday by turning the quickest lap in practice before winning the pole today.

“We’re really strong on the primaries,” Rossi said. “The balance isn’t quite there on the Firestone reds. I think we struggled a little bit through the first two rounds. We knew that if we could get there (Firestone Fast Six), it would be ours to lose, really.

“A huge thanks to the team. It’s been a tough go for all of these guys. It’s a good boost for everyone.”