SURGERE RETURNS TO NO. 98 HONDA FOR MID-OHIO DOUBLEHEADER 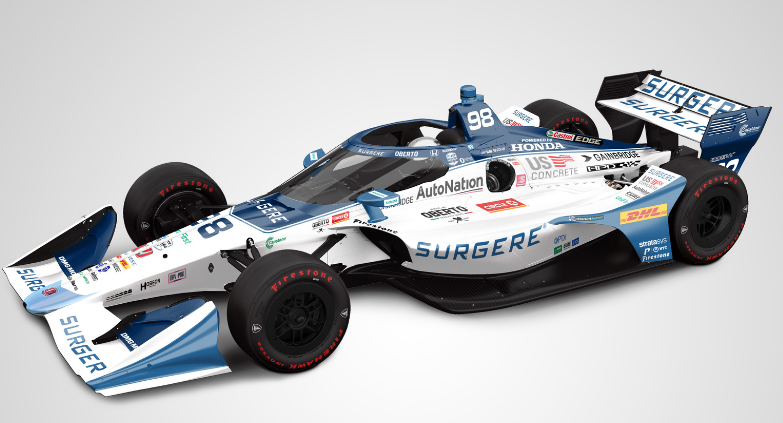 Returning to the sidepods of the No. 98 machine of Marco Andretti will be Surgere for the upcoming doubleheader INDYCAR weekend at Mid-Ohio Sports Car Course. Surgere first joined the Andretti Herta Autosport with Marco Andretti & Curb-Agajanian team as an associate sponsor for the previous events in the 2020 NTT INDYCAR SERIES season, and additionally served as the primary on the No. 98 during the INDYCAR iRACING CHALLENGE at Barber Motorsports Park.
“Our focus is always a win-win client partnership. Being part of the winning team at Andretti Autosport is an extension of our overall, family-oriented philosophy.” said William Wappler, President and CEO of Surgere. Surgere is taking supply chain management to another level. Its digitalization and IIoT capabilities are providing clients with highly accurate asset visibility, advanced data analytics and AI directed action through each segment of the supply chain.  With headquarters in Cleveland, Ohio, and explosive growth around the globe, Surgere will stay close to home this weekend though as the primary sponsor for Andretti at Mid-Ohio Sports Car Course.
“Over the season, so far, Surgere has already grown to be a great part of the Andretti team,” said Andretti Autosport chairman and CEO, Michael Andretti. “We’re excited to continue that growth and see the Ohio-born brand take on not just a role as primary sponsor of the No. 98 car for Mid-Ohio but expand to be such a great event sponsor with the fan zone as well. I hope everyone that makes it out to the track is able to visit the Surgere Fan Zone to see the No. 98 show car!”
The doubleheader weekend of the Honda Indy 200 at Mid-Ohio sees races Saturday, September 12th on NBC Sports Network and Sunday, September 13th on NBC, coverage also available via the NBC Sports Gold app.