THE GRID IS SET FOR THE INAUGURAL VIRTUAL RACE OF CHAMPIONS 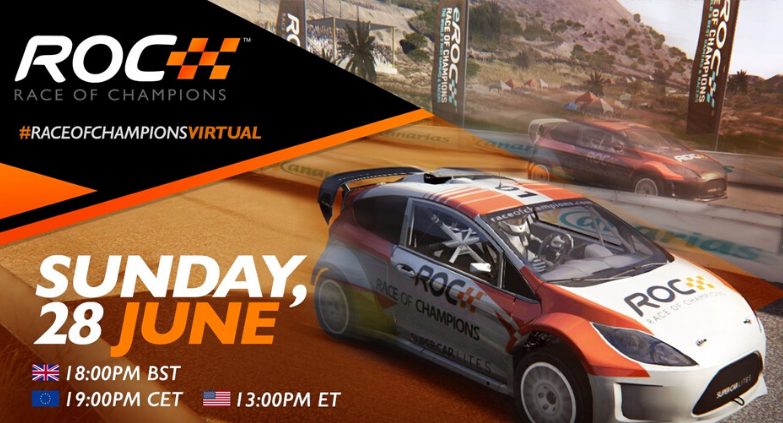 (via Race of Champions )

Sixteen drivers, divided into four groups, will battle for the win in the first-ever Virtual Race Of Champions on Sunday June 28.

They include a wide variety of front-runners from various disciplines including Formula 1, Formula E, WEC, Rallycross, IndyCar and the W Series, as well as former ROC Champions and drivers excelling during the past intense period of sim racing.

The event, which is organised in partnership with Motorsport Games, will follow a similar format to the real-world Race Of Champions. Some of the biggest stars from Formula 1, World Rallycross, Formula E, Le Mans and other major disciplines will go head to head in identical cars. They will face off on virtual versions of some of the most iconic venues of ROC’s rich history, such as the mixed gravel and tarmac roads of the original Gran Canaria track and the twists and turns of London’s Wembley Stadium.

The tracks have been built from the ground up in the sim racing game Assetto Corsa and have not been used in competition before, ensuring a neutral platform and fair competition for all participants. Just like in the real-world Race Of Champions, the drivers will have to showcase their diverse skill set to quickly adapt to a wide variety of machinery, including a VUHL supercar, a rallycross car and the classic ROC buggy.
Fans of sim racing all around the world also got the opportunity to claim a place in the eROC World Final part of Virtual ROC. Sim ace Nils Naujoks, a finalist at eROC 2019, and G2 Esports driver Arthur Kammerer, set the two fastest hotlaps on a virtual ROC Mexico track beating hundreds of other participants to qualify for Sunday’s event. In the eROC World Final they will face off against former eROC Champions Enzo Bonito and James Baldwin.
The event will also feature a traditional ROC Nations Cup with several eye-catching line-ups, including two father and son teams with Petter and Oliver Solberg, and Andy and Sebastian Priaulx.
Race Of Champions Virtual 2020
Group A

Group B
Group C
Group D
eROC World Final
Virtual ROC Nations Cup
Group A
Group B
The event, which is organised in partnership with Motorsport Games, will take place on Sunday June 28 at 19:00 CET (13:00 US ET, 18:00 BST) and will be streamed live on the Race Of Champions Youtube and Facebook channels.
Keep up with all the latest news at www.raceofchampions.com, Race Of Champions on Facebook and @raceofchampions on Twitter and Instagram. The official hashtag for the event is #RaceOfChampionsVirtual.