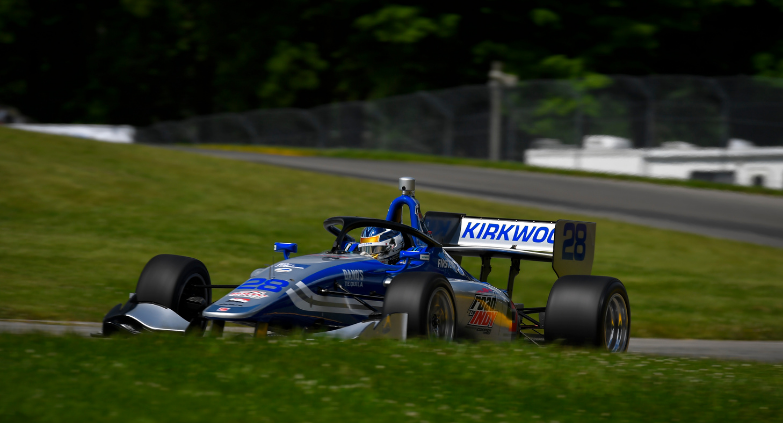 You may have believed that a driver on the verge of becoming the most successful in recent history in his field and joining the series’ most dominant team adds up to instant success.

But for Kyle Kirkwood, it’s been a rollercoaster introduction to Indy Lights in 2021 that has offered searing heights but also drastic lows with Andretti Autosport.

Kirkwood entered 2021 as a back-to-back champion, having won USF2000 and then Indy Pro 2000 at his first attempts to gain a scholarship to race in the Indy Lights championship. While no person has won all three in a row in the Road to Indy era, Kirkwood looked like he could buck that trend this year.

However, it’s been far from plain sailing for Kirkwood. First off, a new rival has emerged, with the HMD Motorsports group running four cars.

David Malukas is the only top-level returning driver to the series and has been a threat, while Swede Linus Lundqvist running under the Global Racing Group banner has looked mighty ever since he switched to racing in America last year.

Looking at the drivers’ championship doesn’t paint a clear picture of how close Andretti has been close to the ultimate pace. The first round of the year was a disaster at Barber as Kirkwood clipped fellow front-row starter Malukas into a spin, receiving a penalty in a race where passing was nigh on impossible.

Kirkwood, now 22, couldn’t have wished for a less ideal start given he sat 2020 mostly on the sidelines as Indy Lights observed a coronavirus-induced sabbatical.

Moving on to St Petersburg, in his native Florida, it appeared to be a return to form where Kirkwood won the first race and narrowly missed out on the second, but then again – this time at the Indianapolis GP – the team’s set-up wasn’t quite right. He missed the podium in both races.

“There’s been a few surprises here this year, we thought Barber and Indy GP were going to be some of our stronger tracks, quite honestly, it wasn’t,” Kirkwood tells The Race in an exclusive interview ahead of Mid-Ohio this weekend.

“And then we went into [the last round, at] Road America this past weekend thinking that it’s gonna be one of our weaker tracks, and it’s been probably our strongest track so it’s strange.

“I’m not sure what the reasoning is. But we know that HMD’s done a lot of testing at some of these tracks and they’ve definitely got the car in the window last year when we barely did any testing.

“So they’ve obviously learned some things.

“But we did some testing at Road America and, I think, got the upper hand again. So yeah, there’s been surprises, but on both ends, I think, whether there’s good or bad.”

It might look like a flip switch, but marginal gains have allowed Kirkwood and Andretti to move forwards. After leaving Indianapolis, Kirkwood swept the Detroit weekend winning both races, before narrowly missing out on a second sweep in as many rounds with his first ever mechanical failure while racing in the Road to Indy.

Kirkwood credits having a team that also runs in IndyCar for how well Detroit went, as the IndyCar ride-heights and spring settings can be a good starting point for Indy Lights teams too. At Road America, the pre-event test is what made the difference even if the conditions were cooler.

A streak of three consecutive wins allowed Kirkwood to seal the honour of becoming the driver with the most wins (25) on the Road to Indy ladder, but Kirkwood’s focused on the bigger picture rather than celebrating this success.

“I’ve had three fortunate seasons where I’ve been with the best team and I’m able to get a lot of really good wins out of it,” he says.