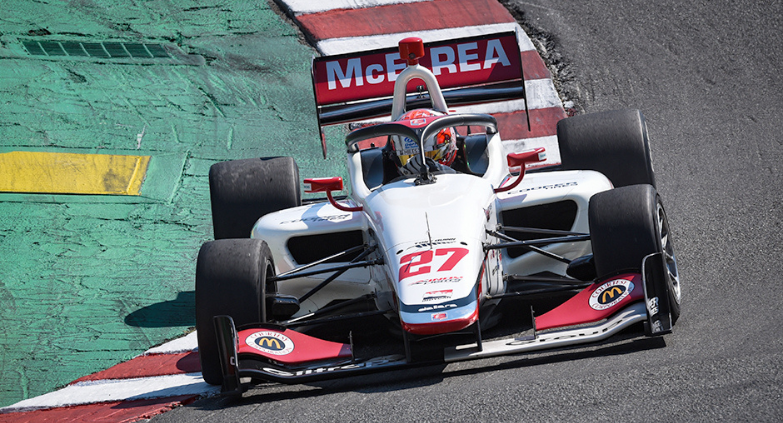 Statistics support Hunter McElrea’s claim that he had a strong second half of the 2022 season in Indy Lights Presented by Cooper Tires.

No driver in the series, including runaway champion Linus Lundqvist, scored more points in the final two-thirds of the season than McElrea.

Trouble was, McElrea finished fourth in the standings due to a poor start to the 14-race season. He was last among 14 drivers in the season-opening race in St. Petersburg due to hitting the Turn 14 wall as the pole-winning race leader, and he was still 13th after the second race, held at Barber Motorsports Park, after contact with teammate Matthew Brabham.

The two incidents put the New Zealander with permanent residence in Australia in a big hole.

“I left a lot of points on the table right there, leaving me with a lot of ground to make up,” said McElrea, the driver of Andretti Autosport’s No. 27 Dallara. “To be honest, that’s where the championship really got away from me.”

McElrea lost 53 points to Lundqvist in those first two places, which means the title outcome wasn’t officially decided there. But rather than finishing fourth in the standings, McElrea could have – and probably should have – finished second. He settled for winning the Rookie of the Year Award.

“Obviously, you still believe you can make it back in time,” McElrea said of his mindset heading into the season’s third race, the opener of the road course doubleheader at Indianapolis Motor Speedway in May. “But in a series as competitive as this one, you can’t have back-to-back DNFs to start the year.”

Lundqvist won four of the season’s first six races to stake a lead too much for any competitor to overcome. Yet, it was a dogfight the rest of the way.

Over the final eight races beginning with the trip to Road America, just 12 points separated the drivers who finished in the top five positions of the standings – Lundqvist, Sting Ray Robb, Brabham, McElrea and Christian Rasmussen, respectively. McElrea led the way with 297 points, five more than Lundqvist and Robb.

McElrea’s second half of the season was keyed by a dominating win at the Mid-Ohio Sports Car Course, in which he led all 35 laps, and a fortuitous win at Iowa Speedway. The latter came about after he was running third late in the race only to see Lundqvist and Brabham tangle in a battle for the lead. Brabham’s car was too damaged to maintain his pace and Lundqvist was penalized for blocking, giving McElrea the victory moments after climbing from his car.

“Honestly, (the actual result) didn’t show how good we were,” McElrea said. “We won pole and led (the first 49 of the 75 laps). We had a really good test there and pretty much controlled the race – we just weren’t strong enough with our traffic running. I wasn’t really confident as the rear (tires) were going away. Had I not run wide on that (Lap 50) restart, I think I would have been able to still win.

McElrea’s season was somewhat overshadowed not only by Lundqvist but also the balance of Andretti Autosport’s drivers, each of whom won a race. Robb was remarkably consistent, with eight podium finishes and a win at WeatherTech Raceway Laguna Seca. Brabham won twice: the opener in St. Petersburg and the oval race at World Wide Technology Raceway. Rasmussen won at Road America and the second Laguna Seca race. Add them up: That’s seven team wins.

“We all had our strengths, which was cool,” McElrea said. “And we were all race winners.”

At the beginning of September, McElrea, who turns 23 in November, became the first driver to be confirmed to return to the team’s Indy Lights program in 2023. He said he will stay in Indianapolis most of the offseason as he gears up for what he hopes is a championship run. The second half of this season suggests he’s on track for it.

“I was happy to have a little bit of a break from the season and just reflect, and I came back really, really hard,” McElrea said of his training and initial 2023 preparation. “I think it’s going to be a good year for me. The second year in a series always helps a driver.

“I got Rookie of the Year and was fourth in points. Not a bad year at all. Lots of lessons learned, for sure.”