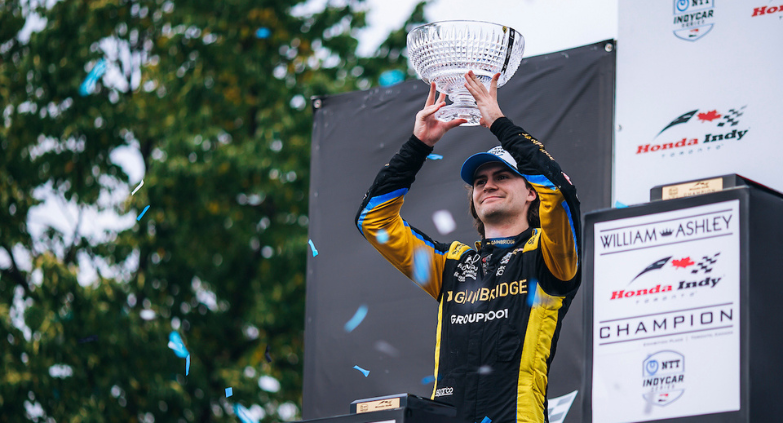 Andretti Autosport took on the mean streets of Toronto in the Honda Indy Toronto with the NTT INDYCAR SERIES for the first time since 2019. The outcome was a strong showing, with all four Andretti Autosport entries advancing into the top 12 of qualifying and Colton Herta finishing second overall in the race.


Colton Herta took home his 11th career podium finish in 58 starts of his four-year career. That statistic came after Herta won his second NTT Pole Award of the season in the No. 26 Gainbridge Honda. He’s the first driver to be a repeat pole award winner this season and the youngest driver to hold nine career poles. Herta fought valiantly to stay atop the competition; he turned the fastest lap of the race leaders with a 1:01.0586 on Lap 7. His second-place finish pairs with his win at the GMR Grand Prix as his two podium appearances in 2022. Herta advanced his championship status two positions and currently sits eighth.


Romain Grosjean had a difficult weekend, albeit one he and the No. 28 DHL Honda crew could be proud of in the end. Grosjean’s team used every minute between Practice Two and Qualifying to put the No. 28 back together after a swipe of the wall cut Grosjean’s Practice Two short. Grosjean wheeled and willed his car to an 11th-place starting spot. He gained ground in the race before being assigned a penalty for speeding in pit lane on Lap 49. The penalty would have him drop to the rear of the field. Determination pushed him back up to 16th place overall, making the most on-track passes of the race.


Devlin DeFrancesco played hometown hero in Toronto. Before any on-track action, DeFrancesco visited weekend supporters at Sunnybrook Hospital to meet the doctors who saved his life 22 years ago. As a prematurely born baby, DeFrancesco was given last rights three times before his vitals strengthened and his family brought him home. The Canadian driver had his best qualifying effort of his INDYCAR career in front of his home crowd. DeFrancesco qualified 12th overall, making his first transfer into Segment Two in qualifying. During the race, DeFrancesco ran as high as ninth; however, he would finish 18th in his Andretti Steinbrenner No. 29 BitBuy/ Sunnybrook Honda.


Alexander Rossi showed strength all weekend, topping the time charts in Practice One and finishing Practice Two inside the top 10. Rossi qualified the No. 27 NAPA AUTO PARTS/ AutoNation Honda fourth overall and would run most of his race in fourth place. While Rossi made lunges for third, it was while defending his fourth-place position on Lap 45, the No. 7 car came together with Rossi and pushed the No. 27 into the Turn 3 tire barrier. The damage sustained from contact with the barrier ended Rossi’s race and settled him with a 23rd-place finish.